CAPTCHA tests are one of the Anti-Cheating mechanisms on TypeRacer.

A user is asked to type within 25% of the wpm score achieved by them in the race that activated CAPTCHA. For example, if the user gets 145 wpm in a race, the typing tests now asks the user to type at only 108 wpm, whereas before, it asked for 125. If the user passes the test in this example with, say, 109 wpm, the user will actually be certified for 145 wpm since that was the original race score.  Similarly, if the user passes this test with 150 wpm, you would be certified for 150 wpm, since it’s greater than your race result.  Being certified to type at X wpm means that a user will not be asked to take the typing test unless if their score exceeds X+25%.  So if a user is certified at 150 wpm, for example, they are clear to type up to 187 without having to take the test again. [1]

Right-click a user and click “Report user”, click the link, and fill out the form indicating the reason for reporting the user. The options in the 'Why' section are 'Profanity,' 'Cheating,' 'Harassment,' 'Spam,' and 'Other'. Then fill in some details (optional). [2]

Other measures taken to prevent cheatingEdit 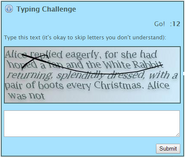 Add a photo to this gallery

Retrieved from "https://typeracer.fandom.com/wiki/Anti-Cheating_Mechanisms?oldid=4254"
Community content is available under CC-BY-SA unless otherwise noted.